Two Brits, a Scots and an American on the Menai bridge over to Anglesey

The adventure continues with the addition of my cousin Alexa and her cycling friend Tomo from Edinburgh, Scotland.  They joined us in our sparse, but adequate campsite at the Pall Mall (no, not the cigarette company) camping field just outside Tywyn. Well, they really met up with us in the White Hall Pub in Tywyn for pints and a little Olympics.  One of the biggest challenges with our new cycling partners is trying to understand the thick Scots accent and wicked British/Scottish humor.

We started our day climbing from Tywyn, into the Snowdonia national park to Dolgalleu. The views of the hills and valleys of Snodownia grew more impressive with every upward turn we climbed. The mist was perfect for climbing as the sun was warm and the air thick and humid. The light rain cooled us as we pushed in our granny gear to the top. At the top, Tomo, who arrived first, was met by a sheep farmer in his four wheel drive Land Cruiser. The farmer informed Tomo that the road was closed ahead due to a nasty landslide which had dumped a bunch of mud and muck on the road. It was certainly unpassable. Tomo: “Ey. Wea ‘re nota goen biack doown that’awy. I dendn’t clymb that fur noothin”.

We thanked the farmer for his advice and politely indicated that we will somehow make it past the landslide. He shook his head and drove away. The road quickly turned to a dirt/rock double track and to our surprise, continued to climb. We covered 1300 feet in two miles- fully loaded off road. Once we started dropping I was thrilled to use some of my mountain bike handling skills.

Finally, after a long rocky descent we came across the infamous landslide. We were beginning to think the farmer was pulling our leg. The landslide was a quagmire or boggy mess of deep mud mixed with a fair share of sheep poop. Lovely. After a quick poke around we decided the saddle bags would have to be removed and walked over the top and the bikes fetched after. 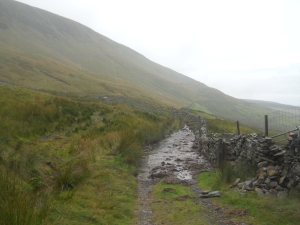 Without a hitch in our day, we portaged around the quagmire, stepping carefully to avoid the shoe-sucking-off mud puddles. Luck would have it that the rain would start just as we started to move our gear.

The ride down the rocky double track was particularly tricky with sections of sharp slate and deep gravel- keeping us on our toes. Once the double track gave way to pavement (at the road closed sign) it was a quick drop into town and a fancy lunch at the Pub. 40+ MPH on a loaded bike can be a bit dicey, but fun. 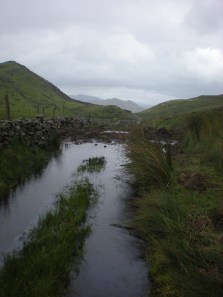 The Road ahead lies below the mud and muck.

We stayed on Shell Island on Alexa’s Advice – let’s stay at Europes largest camping ground- 300 acres of beach front camping fields which are only accessible during low tide. The access road is completely submerged during high-tide and you are stranded on the “island” until the tide goes back out. Pissing down rain almost the entire time, lots of kids in the pub, where everyone was eating their greasy baked beans and chips or pizza and watching the Olympics. Luckily, the view from the campground was spectacular- and the sea was relatively warm for Alexa and Tomo who went for a dip.

We are very excited to have Alexa and Tomo join us- somethings are different- like finding and cooking food for four vs. two or keeping up with everyone on the bikes. But mostly there is just more people to be indecisive, lots of funny moments and great conversation. 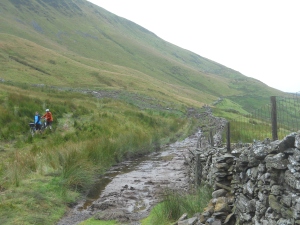 The boys bringing their bikes around- you have to be careful where you step or you will end up in mud to your armpits.

One response to “Portaging Bicycles”