Jen and I had just been talking about how it can be for girls traveling alone.  How there are times when (as Fitz would say) your “spidey sense” is on heightened alert.  We were nearly done with our 4km 12% climb on a small rural road in south Czech Republic. Near the top, I was slightly ahead of Jen when a white station wagon speed past us and then slammed on the brakes only to speed up again and swerve.

I called back to Jen that I would wait for her and we both decided that this station wagon had our spidey sense heightened.  We thought it would be better to pass the stopped car together.  As we came around the corner, we were relieved to see that the car had stopped in front of Jay, who was waiting for us.  From our vantage point, it looked as though Jay was being chewed out by this portly 60 something man with Harry Potter glasses and grubby sweats – Jay was probably being yelled at in Czech. 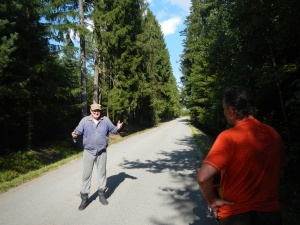 As we approached, the man, Stanley, turned to us and told us, in his animated way, that he thought we were amazing.  When he spoke, his hands moved as if his lips were attached to his limbs with puppet strings.  “I didn’t want to scare you two ladies” he said in his broken English, limbs flying as he spoke.  “I just wanted to tell you that you two ladies are amazing. You are climbing that hill with all your [stuff] and you are doing it.  I thought about stopping and telling you but I thought I might scare you” –

Stanley was out collecting mushrooms, a very popular activity this time of year in the Czech Republic.  He lives in Prague and has a summer cottage in the area.  “I don’t want to take anymore of your time” he said and gestured as he scrambled back into his car and speed away.

We pedaled not more than a 100 yards when Stanley slammed on his breaks and parked in the middle of the road. He threw open his door and jumped out of the car right in front of us. “Please be careful on this road” he said pointing to the road side.  “Two young people died by cars here, you can see their [memorials] on the side of the road. Okay, I won’t waste any more of your time” he said as he again jumped into his car and drove away like a mad man.

Oh Stanley! I think he only knew how to press the gas or brake with the same enthusiasm as he spoke. We were relieved that our Spidey sense was wrong about Stanley.

Czech drivers generally speaking of course, like to go fast, are fairly impatient and are not all that tolerant of bicyclists. Not like in Norway and Denmark where everyone stopped for cyclists and were very courteous to us two wheelin’ folks.