The Transalpina Highway is the highest paved road in Romania. The highway starts in the north in Sebes and heads directly south over the Carpathian mountains and ends in a small village Novaci.  Also known as the Kings road, the 148 km highway passes through the Urdele Pass which sits at 2,145 meters above sea level.  Although some claim that the Urdele Pass is the highest point, we were informed by Daniel (a nice young man waiting for his buddies to return from their climb of one of the high peaks) that the second pass is actually higher. The road is mostly paved.  There are short sections that are dirt and a few mud slides to work around.  Most of the road is sweet new pavement.

We decided to climb the Transalpina over two days.  We started in Sebes on the 4th of September and climbed steadily for 1095 m in just over 65 km.  We stopped at a small pension at Lake Oasa – our room was simple but exactly what we needed for the night.  It was cold, wet and the camping was limited, so we opted for the pension.  Lake Oasa is a man-made body of water that has a large dam at the north end. The climb up to the dam is the steepest on this part of the road.  At the dam, there are several vendors selling trinkets, ice cream (they were closed) and fresh, hot corn on the cob.  It was delicious!

This morning we decided to sleep a little later as it was raining and we were hoping for at least dry roads.  Luckily, the rain subsided and we had a nice cool day for our climb.  The climb quickly turned steep and we were very soon in our lowest gear, slogging up the hill.  At the cross roads with the D7, we came across a Gypsie village – selling goods to people in cars, vans, motorcycles and the occasional bicyclist.  We were happy to see the fresh Kurtoskalaks booth- of course we had to have one.  We sat on the side of road and enjoyed a little baked heaven.

From the crossroads, the Transalpina heads south and pretty much straight up. Well, not quite straight, (the Dutch didn’t make this road) it was a series of steep switchbacks taking heading up the side of the mountain.  An hour into our climb we came across a farm stand with fresh Mamaliga with cheese and cream and pork stew.  We stopped for lunch – which they kindly did not charge us for! (I think they felt sorry for us on our bicycles!).

We climbed out of the forest and above the tree line where the views became magical.  Deep sweeping valleys surrounded by golden crested mountains.  So beautiful.  So steep.  Perhaps more disconcerting than the steepness was the sudden gust of head winds that brought you to a sudden stop in your tracks.  Or, if you were not careful the wind will blow you off the side of the mountain.

We climbed to the Urdele pass, said hello to a few German bicycle tourists heading north, changed into warm gear and started the quick decent before the final climb which was short and sweet.  The second pass was 3 km uphill and just over 250 m higher.  Another killer climb energized by the knowledge that we were nearly done climbing.  A quick photo at the top, more warm clothing and a tantalizing drop to Ranca.  We were cautious on the way down as the wind was so strong it nearly threw us off the bikes.

The Transalpina is breathtakingly beautiful. The Romanians may not be known for their roads, but on this specific highway, they really excelled.

Jay has an excellent much more detailed overview of our Transalpina ride on the Crazy Guy on a Bike site: 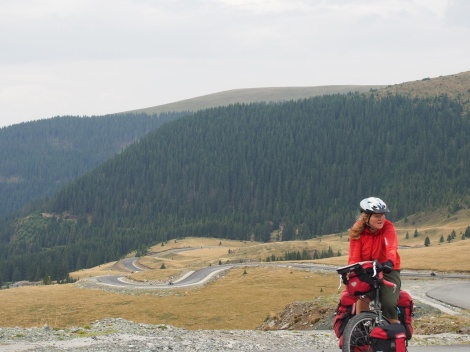 JP Climbing up to Urdele pass 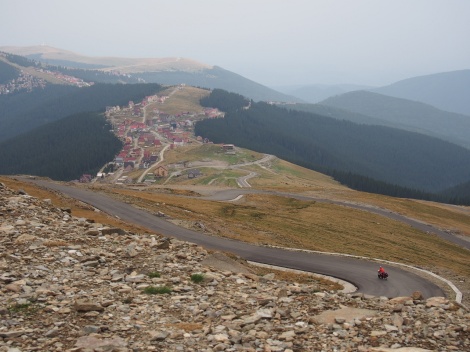 At the top! Yeah!