We had researched the various ways to ride into Istanbul from the Bulgarian border.  You can stay north and follow the small B roads through the mountains. You can follow the D020 – a highway that runs east along the foothills and drops you into the north side of Istanbul. Or you can drop down to the coast on the south side and follow the coast line in – trying to avoid the D100 – Also a major highway that is notoriously busy.

Regardless of our route, we first had to head into Kirklareli from the Bulgarian border-  you can read about that adventure here.  From Kirklareli we cruised up and down the D020 on a four lane highway with a wide shoulder for about the first 12 km.  Then the highway becomes a two lane road with no shoulder.  Luckily, there wasn’t much traffic and the hills weren’t too brutal.  We stopped for the night in Saray at the Saray Otel and had a lovely mixed Kabab dinner out with the two English bike tourers (Dill and Garry) whom we met along the way.

From Saray, we decided to head 20 km south to Cerkezkoy. We heard that there was a daily train from Cerkezkoy into downtown Istanbul and thought that might be the easiest and safest option.   The road was a two lane highway – very busy for most of the ride.  Just before town there was a ton of construction – as they are improving the roads but they have a long way to go!

Cerkezkoy is a nice town- the population is just over 100,000 and it is fairly modern. We found a lovely tea/coffee house where we had a snack and chai before attempting to find the train station.  We asked the waiter if he knew if there was a daily train into Istanbul.  He confirmed that there was not a train, that they discontinued that service and suggested we take a bus.  We thought it over and decided that we both wanted to see the Sea of Marmara and that we would take our chances with the southerly route.

We climbed out of town and had a fairly nice ride on a two lane highway with a shoulder some of the time. We made it down to the Sea and immediately left the highway for the small coastal village roads that parallel the D100.  We were rolling along, planning on staying in Silivri in a hotel – when low and behold there’s a camp ground right on the Sea.

We dropped down to the camp and were greeted by three men, two rather large Rottweiler’s (on chains thank goodness) and a chatty lab.  Yep, you can camp here for $10 per night and for a few more $$ you can stay in one of our camping cabins.  We viewed the cabins and discussed our options – we always have one dinner and breakfast with us just in case. We decided to camp in the cabin on the sea. 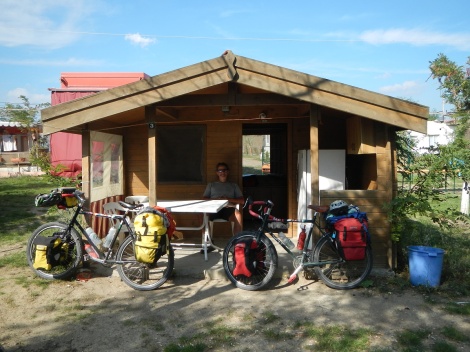 We had a lovely evening being entertained by the army of kittens who were vying for our attention and our left overs.  Kittens are the cutest entertainment anywhere in the world.  We also had Sandy, a stroppy lab mix who would check in on us and get chased by the little cats.  Jay napped while I went for a dip in the sea. I stepped into the warm water and was about to dive in when I noticed lots of what looked like plastic bags just under the surface.  Quickly realizing that they were not plastic bags but thousands of Jelly fish, I quietly backed out of the water and settled for reading my book in the warmth of the sun on the solitary beach chair.  I had the entire beach to myself.

Interestingly, there was no potable water at the camp ground. We always carry a filtrations system with us- saves us the cost of always having to purchase water.  So, we filtered the water from the “kitchen” area. We quickly realized that the water was from the sea when our tea tasted like polluted salt water. It was disgusting.  Luckily, the boys who run the camp had a 10L bottle of fresh water which they gave to us for free.

We slept well regardless of the noise the German tourists made as they unloaded from their very large modern bright red tour bus.  Apparently the camp is an overnight stop for a Germany to Istanbul tour-company.  The Germans showed up around 9pm, unloaded from the bus, set up a beer tent, drank and chatted for a few hours then disappeared into the mobile hotel set up on the camp ground.  In the morning, they set up a breakfast buffet, made a lot of noise before 7am, loaded the bus and were gone by 8am.  Jay slept through it all. Lucky boy.

We lazed a bit in the morning, enjoying the sun and free wifi.  Once we mobilized, we headed out along the village roads and occasionally, for very short sections, had to ride on the D100 – which at this point was a four lane highway with a very nice shoulder.  We decided to head around the peninsula just south west of Buyukcekmece.

As we headed south down the main road we were called out by a man sitting in a bike store.  “Have some tea” – and we did. Three cups later and a lovely conversation between groups of people who don’t speak the same language later, we were on our way again.  The multi complex housing and development on this peninsula is the start of the population density of Istanbul.

We navigated back to the D100 to cross the isthmus that leads onto Buyukcekmece. Once on the East side we headed south and found a nice hotel on the beach side board walk.  The rain set in during the early evening – luckily we only had to walk a few meters to find a suitable dinner. We had a lovely meal at Mado – and were again entertained by kitties.  Cats and kittens are everywhere in Turkey.  As are wild (but much more docile than in Romania) dogs.

Saturday morning brought more rain and a lack of enthusiasm for navigating the very busy Istanbul streets for 40 more kilometers. We arranged for a taxi to take us to the ferry terminal just outside the airport – the driver (that’s another story – soon to come) dropped us off at the wrong ferry terminal- which meant we had to wait until 420pm to get across the Bosphorus to our lodging in Uskudar.

We weighed our options, turned on our iPhone to check the map and were surprised to find that the taxi driver had actually taken us a lot further into town than we had planned. We decided to ride to the main ferry terminal on the north side of Sultanhamam and were pleasantly surprised to find a fantastic bike lane all along the water front.  We bought an Instanbul travel card (you can purchase them from the little kiosks around the ferry terminal) and wheeled our bikes on to the ferry to Uskudar where we are happily camped in a tiny flat.

Happy to find a bike path in Istanbul

Would I come into Istanbul via the southern route again? Probably.  The coast is beautiful. If you choose to ride this route, I would recommend having lots of time – not being in a rush and enjoying riding through all the neighborhoods.  If you are in a hurry to get to Istanbul – this route is probably not the best option.