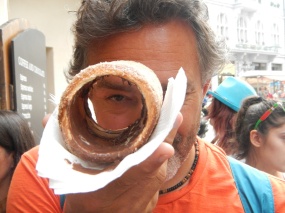 Coated with Nutella on the inside.

Kürtőskalács are a yummy Hungarian sweet bread originating from medieval times. They were typically made only for special occasions but are now on every street corner in some of the touristy areas of Prague.  Jay and I discovered them in Prague and then again in Budapest, Hungary.  They are a delicious yeast raised sweet dough, dipped in sugar and cooked on a large cylinder, traditionally over an open fire.  They are also called Trdelnik in the Czech Republic and Chimney Cakes (not a romantic name) in the English world. 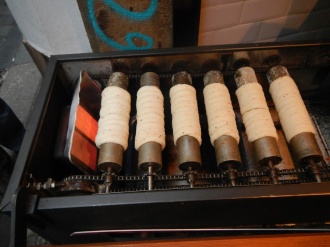 As I don’t have a spit and open fire set up I thought I would try to McGyver a system to make this yummy treat.  I tried two different techniques: the first was an empty bean can with two tomato paste cans on either end all wrapped in foil.  This contraption is then rested on a standard size bread tin and you can rotate every 5 minutes or so.

The second is simply an empty bean can covered with foil, sprayed with sunflower oil. This then stands on end in the oven. Turning to switch ends half way through.

Empty two standard cans (I made chili tonight so used the bean cans) – take both ends off (so you have a hollow tube) and cover with aluminum foil. Spray the cans with oil.  Split the dough into two halves and set one aside.

Rolling out the dough

Gently begin rolling the dough into a long snake like structure (that’s my technical term).  Wrap the dough around the can leaving a small gap between layers.  Roll in the sugar/cinnamon mixture- press a bit hard to embed the sugar into the dough. Repeat with the second half of the dough.  Set aside for 10 minutes to rest.

Bake in the oven for 15-20 minutes until golden brown.  Turn them every five minutes. Once out of the oven, let them cool for a few minutes and then roll them in nuts or any other toppings you like (chocolate sprinkles are yummy).

Or you can spread Nutella on the inside!

Both contraptions worked well enough.  The dough on the can standing on end held together better- so I would skip the fancy contraption and simply use an empty can!  These two first attempts lasted approximately 3 minutes once they came out of the oven. Yum!