I am pretty sure I am going to wear out the words beautiful and awesome while in New Zealand. In fact, I have already abused both of those words on our first bike adventure down under.

The view of Akaroa Harbor from Summit Road.

Nothing like starting your bike tour with a big hill.  “Hey” Chris says as he dishes out dinner on Thursday night, “do you guys want to ride out to Akaroa on Saturday?  I could ride with you and Kelly and the kids can meet us out there” With that, the plans were set. We would ride to Akaroa, Kelly quickly contacted her circle of friends and the next thing you know, we had a “batch” (a summer home or vacation cabin) in Duvauchelle, just 7 km east of Akaroa.

We spent the day Thursday building the bikes and packing our camping gear in Chris and Kelly’s front yard. Marcus, a very fit cycling friend of theirs, stopped by to check out the bike tourists and eyeball our gear. He was busy training for an upcoming 1000km bike packing race.  Now that is crazy! Marcus convinced us that taking Summit Road from the hilltop would be a great way to get to Akaroa, “it is mostly flat and has some gorgeous views”.  Marcus claimed that it only adds 10 or so kilometers and is beautiful.

I have learned “flat” in New Zealand is a relative term.

None of us slept great on Friday night.  We awoke early on Saturday morning packing our gear – Kelly would drive over to Akaroa and meet us with the kids later in the day. She would bring all of our panniers which was a real treat.

Chris adapted his commuting bike using the gear that he had, complete with a little princess backpack and pink bike bottles.

The first 50 km were along the Christchurch to Little River Rails to Trails cycle path.  It seems that New Zealand is converting many of the old railway tracks into bicycle paths – similar to the US.  The path was flat, flat, flat and mostly gravel for 50km.  Easy riding and beautiful scenery.

Flat Flat Flat – on the Rails to Trails cycle path

We stopped for a yummy lunch in Little River and then immediately started the 7 km long, 476 m high hill climb to the summit at the Hilltop.

At the Hill Top

From there, as advised, we headed down Summit Road, which was not flat. The road contours around the ridgeline generally gaining elevation with large up and down rollers.  The views were spectacular. Chris was a cycling madman – strong and unwavering.

We were passed by two cyclists who turned out knew Chris.  Ian worked with Chris at a previous job.  I asked him if there were anymore uphills – he said “unfortunately, there are two more significant hills, but it is worth it.  When you drop down into Akaroa, there are no hills- it is a beautiful downhill”.  With that, we decided to push on.

As I reluctantly stepped on the left pedal, getting ready to start up the hill, a gold Toyota Camry came zipping around the corner and hit my elbow with the mirror on the passenger side.  Luckily for me, the mirror collapsed and did not do any damage.  Luckily for the driver, I was so knackered, I couldn’t even yell. Nothing more than a slightly bruised elbow.

Then, the bike gods smiled.  There was another way down – and it was right there, before the first of those final climbs.  Chris promised that I wouldn’t have to pedal all the way to the “Batch”. In fact, he was willing to bet on it.  We had a sweet 5 km downhill, which ended at the front door of our lodging for the next 2 nights. The beer was on me.

Chris and Jay looking down on Akaroa Harbor from Summit Road. All downhill from here.

Overall, a hard way to get back into cycle touring – but worth every aching muscle. We are happy to be relaxing with family overlooking the Akaroa Harbor, a very beautiful spot in New Zealand. 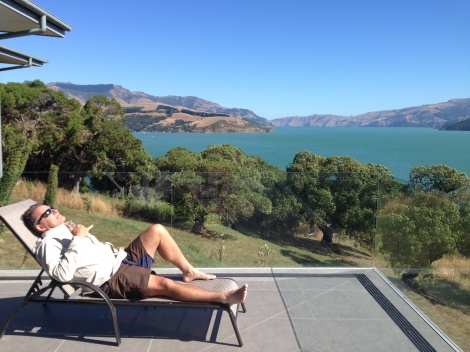