We are now five days into our actual bike tour of the South Island, New Zealand.  We spent our first week hanging out with Janet’s wonderful family, Chris, Kelly, Millie and Penny (and Bennett and Maggie as well), just outside of Christchurch.  We did some cycling while in Christchurch including a jaunt over to the Banks Peninsula (more on that later).

Crossing the plains inland from Christchurch.

Our route took us from Prebbleton across the plains towards the scenic inland highway along the foothills and into the Canterbury highlands. We chose to ride moderate lengths to start as we haven’t been on the loaded bikes for a while and wanted to ease back into touring shape.  We made overnight stops at Glentunnel, Mt. Somers, Geraldine, Fairlie and Lake Tekapo, where we are now.

Generally speaking the roads have been fine: Well maintained and a majority of the pot holes filled in.  There were a few sections of fresh gravel, but they were well sign posted and actually worked to our benefit as the cars had to slow down.  The route through Geraldine was very mellow, flat to a slight downhill combined with some fun rollers and a short drop into and 200m climb out of the beautiful Rakaia Gorge.  The traffic through this section was light, with an occasional logging truck, sheep transport and tour buses whizzing by. 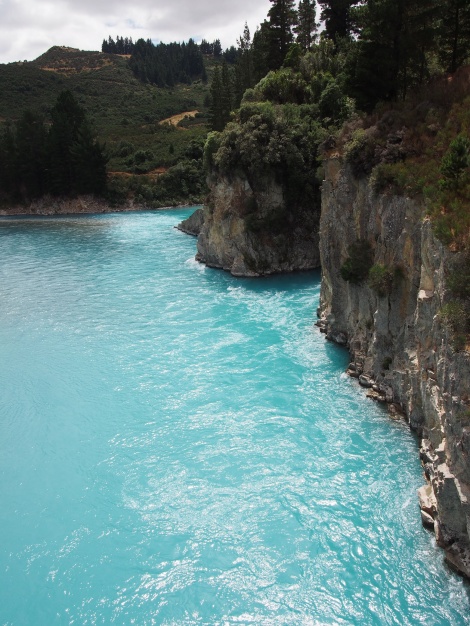 Geraldine is a fun little town with lots to do.  The hills are covered in sheep grazing on dry grass with occasional pine trees for shade. The area reminds us of Sisters in central Oregon.

The ride from Geraldine to Lake Tekapo climbs through Berkes Pass and continues up on these strangely “imperceptible” elevations gains.  The road looks flat, or even downhill, but you keep cranking and switching to lower and lower gears.  Combine that with the constant 30-50km/hr head wind and you are really working hard.

On the road from Geraldine to Fairlie.

Everyone told us that there is a nice drop after Berkes Pass – we believe them – however, the headwind counteracted any downhill gravitational pull!  The traffic on this portion of the road does get a bit crazy as the tourists are coming up from Christchurch (via Timaru) by the bus loads and loads.  The scariest drivers are the ones who have rented a car, van or worse, a motor home.  Especially if they are not used to a right hand drive, they seem to forget that they have a whole vehicle on their left- which ends up well over what little shoulder there is.

Toping out on Berkes Pass.

Once over Berkes Pass we were greeted with sweeping views of the glaciated Southern Alps with Mount Cook nestled among the peaks.  The view was stunning: It sort of made up for the headwinds.

First peaks of the Southern Alps.

We have taken a day off the bikes at the aqua blue glacial Lake Tekapo.  Not a bad place to hang out and do much of nothing. 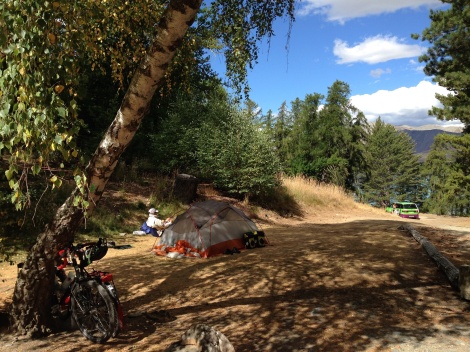 Our “home” at Lake Tekapo.