Several bike tourists we have come across are working while they travel.  Most are either using the Work-away or WWOOfing  (Willing Workers on Organic Farms) web platforms to find their hosts.  The traveler (or WWOOFer as they are often referred to) searches the websites for a host who has advertised their needs, outlined the work expected and the benefits in return.  Some jobs require a specific skill set, most are general enough that anyone can apply.  The usual time commitment is 3-5 hours per day for a minimum of two weeks with one day off each week. 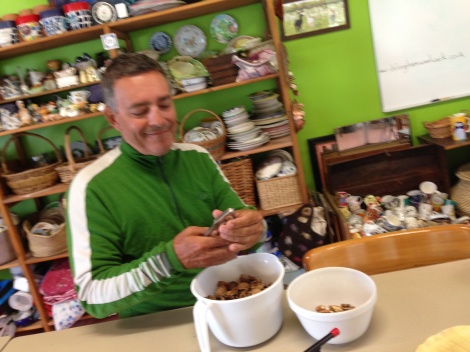 In Topawera we met up with Sam and Jess, a British and Welsh couple doing a work-away holiday and traveling by bicycle.  They were headed up to Abel Tasman National Park to do some carpentry and sewing for a work-away host – they will be living in Marahau for a month. Yes, they will be working but, they also get lots of time off to explore this very picturesque part of New Zealand. They will have room and board covered for the entire month and make a little extra to save for traveling further.  How’s it going Sam and Jess? 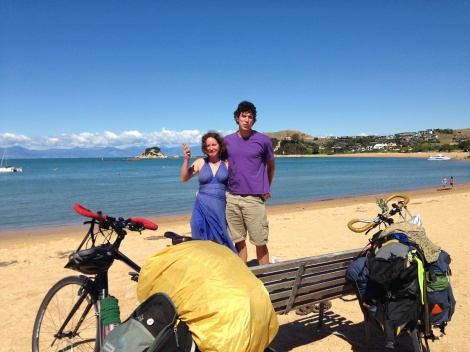 Sam and Jes at Kaiterteri Beach

We had a few extra days in our schedule after visiting Nelson and thought that we would check out some different opportunities.  Janet identified a small alpaca farm 25 km south of Nelson which took WWOOFers in exchange for help with the farm and animals and/or help in the mosaic and felting studio. Additionally, Marion, the host, is a registered dietitian and hosts edible plant workshops – this sounded like a perfect fit.  Marion was scheduled to host a workshop the next weekend – perhaps we could lend a hand. 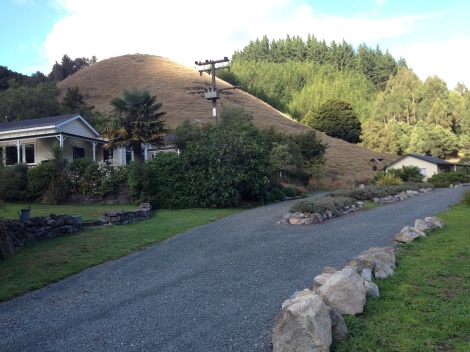 A quick call to Henk and Marion at the Mahoe Alpaca Farm and we were set for a one night stay. They had official WWOOFers coming in the next day who would be staying in their sleep-out so they could only offer one day.  Janet would work on some of the art projects while Jay did the actual work (a perfect set up, don’t you think?)

This was one of those unique experiences that you cannot put a price on.  We were set up in their custom built sleep-out that was purposely constructed to house the WWOOFers.  Jay helped with some basic jobs such as shelling walnuts, unloading firewood, picking native plant seeds (Henk is determined to plant only native species on his property) and feeding the alpacas and Billy, the goat. 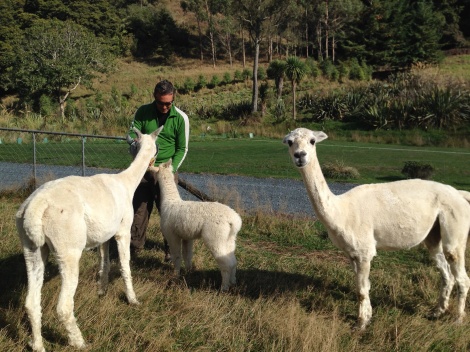 Marion offered a felting class – but Janet really wanted to get some hands on experience with mosaics.  Janet has dabbled with mosaics at home – mostly starting projects that remain hopelessly unfinished.

“Well, I guess you could make a planter, but how will you take it on your bicycle?” Marion inquired.

“I won’t.  I will leave it here.  You can use it as an example of what a person with little skill can do in a one to two day workshop”

While Jay worked away, Janet demolished two cups and four plates and re-assembled them in a somewhat artistic fashion onto an old terracotta pot. The first day was spent playing with power tools and cement like glue. The second morning was used for the tedious and messy work of grouting. 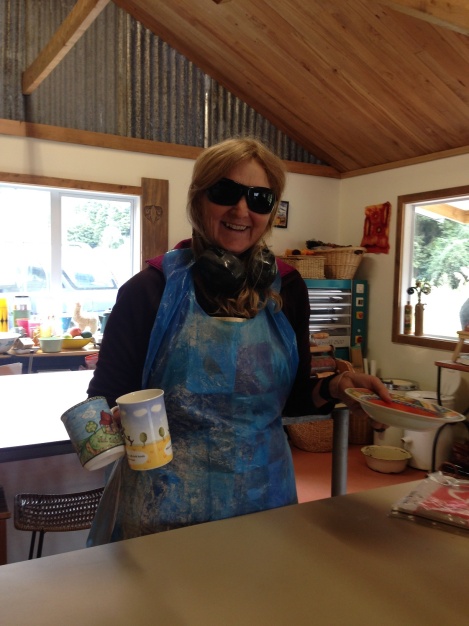 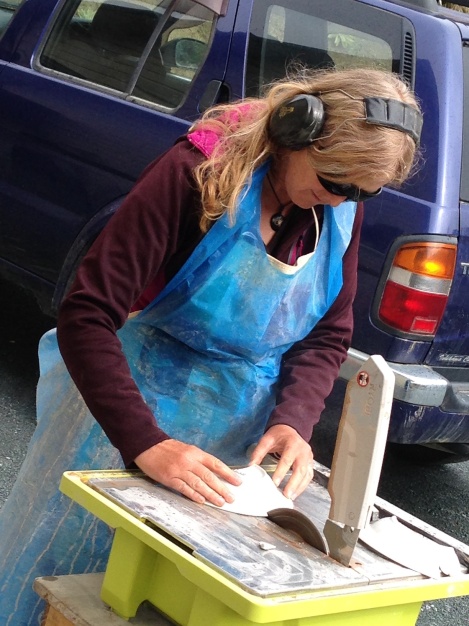 Cutting the plates and cups.

The finished product was not awful. It was not nearly as good as Marion’s – but it was not bad.  We enjoyed our time together discussing nutrition related topics such as diabetes, obesity, health care in New Zealand while Janet cut, glued and grouted. 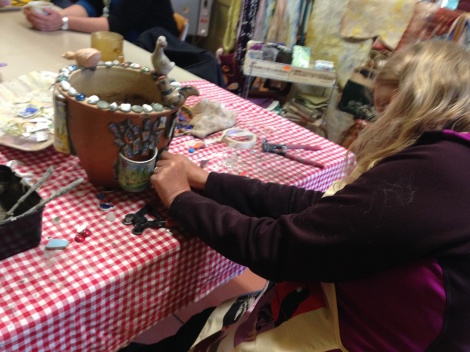 Sticking the pieces on. 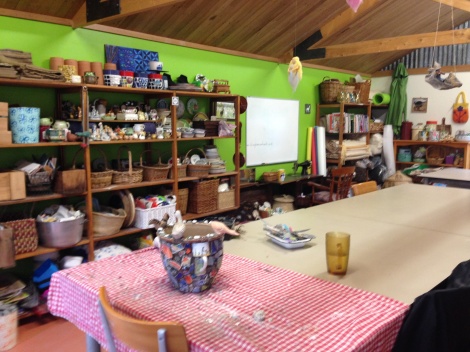 All glued – ready for grouting in the mosaic and felting studio. 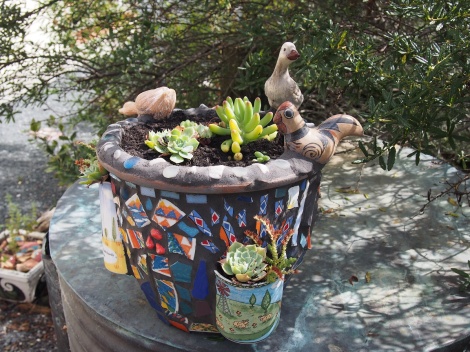 The finished product with plants.

Our evening was spent chatting with Henk and Marion about the farm and life in New Zealand over a glass of local wine. They are originally from Holland and transplanted to New Zealand many years ago. 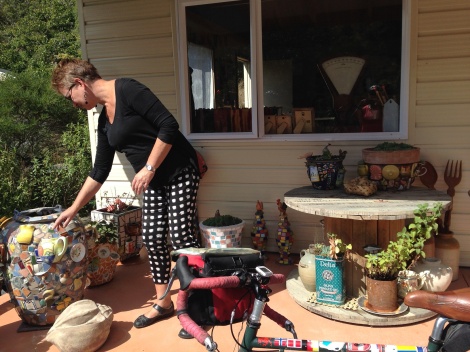 Marion and some of her Mosaics – mine is just to her right on the table.

We both enjoyed our mini Work-away holiday and are happy to have added a unique mosaic planter to the gallery at Mahoe Hills Alpaca Farm. 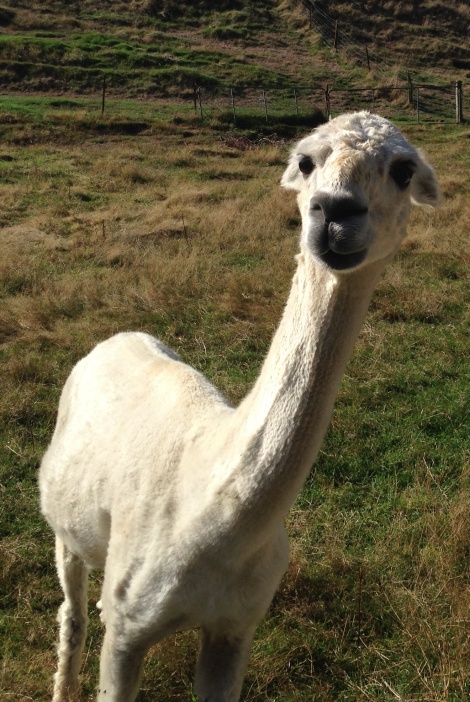 2 responses to “Alpaca and Mosiacs”